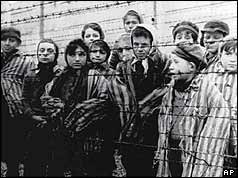 In an ironic twist that reflects the constant dichotomous nature of the world in which we live, January 27th, 2006, is both a day of incredible exaltation and solemn remembrance. It is the day we remember, with joy, the 250th anniversary of the birth of Wolfgang Amadeus Mozart, the Austrian composer whose contribution to classical music is amongst the greatest of all who have ever lived. This is also the day that Soviet troops liberated the site that has become synonymous with the ultimate agenda of Adolf Hitler and his Third Reich: This was the day, in 1945, that Auschwitz was liberated.

The music of Mozart has been shown in various studies to increase productivity when played in the background in factories, and in chicken coups. It has also been shown to raise the IQ's of people studying for exams, as well as significantly increasing their test scores. People who have needed help in relaxing in times of stress have found Mozart's music to be a calm in the storm, and his music has helped to accomplish many other things as well, thus coining the phrase, "the Mozart Effect". In essence, Mozart has fulfilled that which so many artists, and others, have strived for throughout our history: To enrich the human spirit, creating a better world for everyone.

In contrast, Adolf Hitler and his henchmen did everything within their power to do the exact opposite. Abandoning the precepts of living with their neighbours in peace, they adopted the ideal of death and destruction as a means to their diabolical end.

Using paranoid lies in the guise of propaganda in order to delude the populace that the way of the Reich was right, Hitler was enabled to carry on a reign of terror that took the blood of millions to finally bring it to an end. Ultimately, Hitler is the antithesis of Mozart in every way: Where one stood for beauty and creation, the other represented hideousness and destruction. Where one dedicated his life to elevating the human spirit, the other dedicated his to tearing down all that had been built up by generations of humanity.

When fear, paranoia, and prejudice guides the beliefs of a people, nothing good can come of it, for truth cannot shine through the veil of ignorance covering their eyes.

May the world never see the spirit of another Hitler, but many more Mozarts (writing, painting, sculpting, and doing all things creative)!

Remember — we can only prevent the past from recurring by teaching the next generation about history. History is only be repeated by those who do not know that there are better ways to live, and that we must be seduced by the lies of deception and deceit.

Brilliant blog young man. Your parents must be mighty proud of you.