The following comment was inspired by a petition posted at the Change.org site. A young man, Alvaro Orozco, fled his home in Nicaragua when he was 12 years old to escape the beatings from his father. His father was beating Alvaro for a simple reason: the boy was gay. He came to Canada where he has become a very accomplished artist, as well as a gay activist. In 2007 his refugee claim was denied when it was declared that Orozco did not look "gay enough" (the adjudicator was in Calgary, conducting the interview via video conference).

You can read the details about the case and sign the petition here, but please read my comment below. 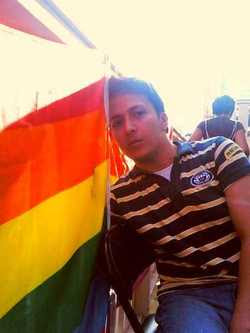 I would like to call on Minister Kenney to immediately rule in favour of the Humanitarian and Compassionate application made by Alvaro Orozco. The fact that he potentially faces death by the hands of his own father in Nicaragua is only compounded by the grossly insensitive treatment that he received by a government official who, interviewing him via a television screen, rejected his application on the bases that Orozco did not, according to the adjudicator, look "gay enough" to fulfill the requirements for a Calgarian's assessment. The fact that Alvaro Orozco had been working extensively in the gay community and had left his native Nicaragua to escape severe physical abhttp://www.blogger.com/img/blank.gifuse from his father who had threatened to kill "any child of his that was homosexual" was apparently not proof enough.

It is illegal, in Canada, to discriminate against someone on the basis of sexuality, and that is precisely what has been done here, but in such a perverted manner, it is mind boggling. Someone has come to this country seeking our help, seeking safety from persecution, and a Canadian official has cavalierly judged them based on their looks, declaring their sexuality to be not what they declare it to be simply because of the adjudicator's prejudices and preconceptions. This is something that must be redressed as quickly as possible, before Orozco is deported to Nicaragua where he faces the very real possibility of losing his life.

Minister Kenney: it's time to right this wrong before it's too late.

Orozco Arrested, May 13
Story from Gays without Borders
Written by Unknown at 11:41