The Legacy of a Civil Rights Hero 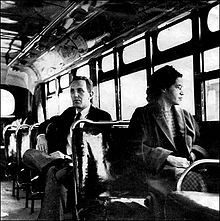 You have heard the name, but do you know the story of Rosa Parks and the role she played in the Civil Rights Movement? What happened in Montgomery in 1955 was far more important than anyone imagined when the events were unfolding at the time. Rosa Louise McCauley did not begin her life dreaming of becoming the “Mother of the Civil Rights Movement”, she was born in Tuskegee, Alabama, the granddaughter of former slaves and the daughter of a carpenter and rural schoolteacher. Rosa moved to Montgomery, Alabama, and attended Alabama State College, an all-black school. It was there, in 1932, that she married Raymond Parks, who worked as a barber. It was at this time that Rosa also became active in Montgomery’s chapter of the NAACP, the National Association for the Advancement of Coloured People.

Her work with the NAACP was more than just passive membership; when she joined the organization in 1943 she worked with the state president, Edgar Daniel Nixon in mobilizing a voter registration drive in Montgomery. Rosa Parks was also elected Secretary of the Montgomery branch of the NAACP in 1943. There should be no doubt that the heart of a true activist beat within the chest of this future Civil Rights leader, even years before the most significant act of her career would take place; an act that was born out of a desire for nothing more than fairness.

In the 1950s Rosa Parks began working as a tailor’s assistant in a department store, Montgomery Fair, she also worked part-time for a white liberal couple who encouraged Parks in her Civil Rights work. Six months before the arrest that would change the history of the Civil Rights movement Rosa received a scholarship to attend a workshop on school integration held at the Highlander folk School in Monteagle, Tennessee. The workshop was aimed at community leaders, and Rosa Parks spent several weeks there.

In the segregated South public transportation allowed for anyone to use the service, but it was anything but “public” in the sense that if you were a “coloured” person you had to surrender your seat to a white person, and move to the back of the bus. African Americans were required to pay to ride the bus at the front of the bus and then re-board through the back door, they were not even good enough to take a seat through the front of the bus: that is how they were perceived at the time. The first ten seats on the buses in Montgomery were permanently reserved for the white passengers, and when the bus become crowded the drivers would instruct any black passengers to make room for white passengers. On December 1, 1955, Rosa Parks refused to move. 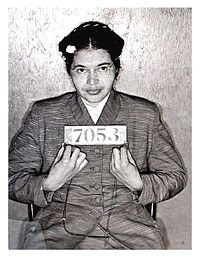 The ramifications of this action shook Montgomery to its core, changed America, and began an action that was watched by the world. It also launched the career of another Civil Rights activist, someone who would galvanise the movement, and transform it in ways no one could have foreseen before Rosa Parks’s actions that day.

After the arrest of Rosa Parks she was released on a $100 bond that was posted by her employers, the Durrs, and the president of the NAACP, Edgar Nixon. Rosa decided to allow the NAACP to take on the case and another organisation, the Women’s Political Council, which was led by JoAnn Robinson, came up with the idea of having a one day bus boycott coinciding with the date of Park’s trial. The WPC printed and distributed more than 52,000 fliers spreading the word about the boycott, on December 5, the day Rosa Parks would stand trial.

On that day the buses went through Montgomery almost empty and Rosa Parks was convicted by the local court and fined $14. With the assistance of her lawyer, Ed Gray, she immediately filed an appeal to the circuit court. While her appeal languished in red-tape, the U.S. District court was dealing with another case having to do with racial segregation and public buses, ruling that it was unconstitutional. That case, Browder v. Gayle, was ruled upon on June 4, 1956, by a three-judge panel that included Judge Frank M. Johnson, Jr. The decision was upheld by the United States Supreme Court in November 1956. Rosa Parks never paid her fine.

On the day of the boycott, December 5, 1955, there was a new minister in the town of Montgomery named Reverend Martin Luther King Jr. He became the president of the boycott committee, urging the residents of Montgomery to stay off the buses, fighting for justice by opposing those who denied them the same. The boycott ultimately lasted 381 days and propelled King into the spotlight of national prominence as a Civil Rights leader whose voice could not be ignored. The Montgomery bus Boycott remains as one of the seminal Civil Rights actions, a marking post in the history of the movement, and it all began with the actions of one woman named Rosa.