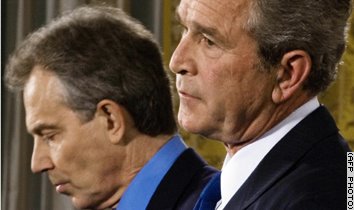 When I was a kid there was a toy that would be advertized with the jingle, "Weevles wobble, but they don't fall down." That has become, in my mind, the theme song for the present Bush administration. The Feeble Weevle keeps wobbling around the White House and, save for the many hands around to prop him up, he'd have made several face plants into the Oval Office's carpet by now.

The present public opinion of the president is low enough to have the White House staffers thanking God that they don't have to run for re-election in 2008 ... oh, but wait, they really do run for re-election don't they, even if it isn't with Bubba Bush, there will be a Republican on the ticket.

Perhaps that's why the President did something this week that he hasn't done in the past six years: He changed his story, shifted gears, moved his mind into another space. During a televised press conference that lasted about an hour and included Bush's favourite world leader puppet, Great Britain's visiting PM, Tony Blair (who is similarly stumbling in the polls in the UK and whose ability to regain the trust of his own electorate is rather bleak as a result of having had Bush's manipulating hands so far up his arse since the creation of the great alliance against terror), the "most powerful man in the world" was asked if he regretted anything in the way he had handled the situation with the "war on terrorism". The answer was something that caught quite a few people off guard, but how sincere was it? Was it the sign of a conciliatory move, or was it something else? Considering that there were no moves towards conciliation, there must be another answer.

His response was stunning, and truly cunning, but it was not an effort at conciliation with an enemy continues to kill American troops that they see occupying their homeland, Iraq. It also demonstrated the true level of desperation that the White House Republicans must be feeling given the recent 37% approval ratings of the President. Instead of his usual, arrogant attitude, Bush replied that he regretted having said "bring it on" in regards to the insurgents in Iraq and to saying that he wanted Osama bin Laden "dead or alive". Bush went on to say, "I learned a lesson about expressing myself in a more sophisticated manner. In certain parts of the world, it was misinterpreted, so I learned from that."

The truth of the matter is quite different, and that is what we should really be looking at right now. Can people really change in the manner that George W. Bush is indicating? Will someone infamous for speaking without considering what they are about to say be able to make a complete 180-degree turnabout, to become a well-spoken, thoughtful, erudite and, dare I say, enlightened individual? Someone that exudes the qualities of leadership and who would make a great president?

In the movies, perhaps, but in real life? It seems to me that someone has been watching Pygmalion by George Bernard Shaw. Taking the young woman out of the poorest parts of London, England, and turning her into the epitome of the "society women" only proves the veneer of substance involved within the class structure, it does not, however, make up for someone's ability to actually be intelligent when that is a necessary skill.

This is something that George W. Bush sadly is not. His reliance on aides and assistants is not unlike anything that any other successful leader hasn't used, but it is his reliance on their guidance that is so troublesome.

Is this going to be a Presidency that will go down in history as having been directed completely out of the Chief of Staff's office, and the other top aides? Or, is the President really at the helm? When this man speaks, and he isn't reading from a prepared statement, can you imagine the looks of anticipation on the faces of the White House staff, wondering what kind of damage control might be necessary after this speech.

After a top U.S. military official in Iraq had stated that their force reductions were already under way, Bush stated they would be sending MORE soldiers to Iraq. Oh. Apparently someone had neglected to brief the Commander in Chief of the United States Military that they were beginning to reduce their military presence, especially since the country in which their men and women were dying had recently elected its own government, and was beginning to take care of things itself.

Maclean's magazine (April 17) asks if Bush is "The Worst President in 100 Years?" The United States will be 230 years old on July 4 this year. I would toss my vote into the fray that Bush is the worst President in the last 230 years, and it would have to be someone really remarkable to beat him.

At least Nixon resigned.
Written by Unknown at 13:55