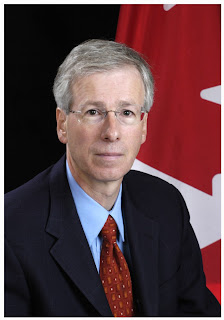 Several months ago I sent an e-mail to a friend of mine that I was thinking a great deal about yesterday while watching the final hours of the Liberal Leadership Convention on television. As I have never been a card-carrying member of any political party, and don’t have any plans of joining one in the foreseeable future, I look at these events as opportunities to see what these politicos act like when surrounded by their good buddies, as opposed to being hounded by “the opposition”, and other undesirables (such as their constituents).

I’m really not sure where my fascination for political conventions comes from, but it seems to go back quite a bit: as a teen, in high school I recall watching the Democratic National Convention that selected Geraldine Ferraro as Walter Mondale’s running mate … and I remember thinking to myself that, “there’s no way America will elect a woman VP … yet.” That was the 1984 convention, which led to the second term of Ronnie Ray-Guns … or, Bush I (making Dubya, the son of Bush II, who suckled at Ray-Guns mams, Bush III … or just Bushwhacked … whichever).

Whatever the cause, I find political conventions a fascinating display of the human condition, though that condition isn’t necessarily what the humans want others to see; all the better when things like that happen, I say … all the better.

As for the recent Liberal Convention and my particular interest, it all centres around a particular message that I sent to a friend on January 24th of this year, shortly after the election of Stephen Harper and his minority government. The relevant section of the message stated,

“ Well – there it is – Martin just announced that he will serve his constituents, but he will not continue to serve as the leader of the Liberals. Nobody has been named (Belinda Stronach was been asked earlier by CTV idiots if she would "throw her hat into the ring" if the time came ... she refused to reply).

Personally, I think the best choice (yes – call it "that", if you want –) would be a very wise individual named Stéphane Dion ... brilliant individual, and he would be a powerful force in la Belle Province. The other name that leaps to mind is Pierre Pettigrew, another character that could pull the Red L out of the Blue Q PQ.”

Of course, my assessment of Dion’s popularity in “La Bell Province” may have been something that was not fully considered, though I still believe that Dion will have greater appeal in Quebec than the majority of the people Harper is able to propose as candidates. When it comes to the west of Canada, this shouldn’t be a problem: there have been several prime ministers who have been from Quebec, and they have received support from the west, though the majority of their support has come from central Canada (thanks to our unbalanced electoral system).

The election of Dion as the leader of the Liberal party signals a significant shift in the party, a shift away from the path that Paul Martin had adhered to while serving as finance minister under Prime Minister Chrétien, but had difficulty adhering to after he took the reigns of the government. Dion is dedicated to focusing on three pillars as the foundation of his leadership, and, presumably the government, if the Liberals are elected. Those three pillars are: integrating economic prosperity, social justice and environmental sustainability.

It may seem like simplicity itself, but in a time when we are still facing vast economic disparity within our own country, and nations that are experiencing genocides, there are great things that need to be done. The virtual abandonment of our commitment to the Kyoto accord, which only goes to the year 2012, is desperately in need of re-visitation, and social justice is something that needs to be examined on a national and international level, especially in light of recent events in Lebanon.

These are three pillars from which an entire country could be run: health care and social programs can fall within the economic sustainability and social justice portions, while we could likely find a place to fit every other concern (there is always a way to make things fit). Even if it doesn’t fit, that is one of the things about leadership: at some point you must recognize that there is a time to hold steadfastly to your plan, while at other times it is necessary to change course in order to avoid being destroyed by an advancing army.

I truly hope that Stéphane Dion turns out to be the type of leader that is able to listen well to the wise voices, filter out the foolish, and take the time to assess the situation before committing his forces to a hopeless cause. If he does, his first mission, the defeat of Harper, will be successful, but that only gets him into the Big Chair … from there the real work begins.
Written by Unknown at 17:18

How about sending Stéphane Dion to gaza to learn how to listen well to the wise voices, filter out the foolish, and take the time to assess the situation before committing his forces to a hopeless cause.
As for defeating Harper, I am sure that Hamas will teach him a few tricks - like convincing a kid to go blow himself up right next to Harper so that he will become a shahid and get 72 virgins.

I just hope Harper goes down, although I don't think Dion will make much of a difference in the big picture. Maybe he's be a bit less of a neocon ass, but they're both capitalists, after all ;)