This is an important year for the State of Israel and the people living in that land. As they celebrate their 60th anniversary as a nation another people are observing another anniversary, one with less cheers to be sure, but a sober observance nonetheless. Those who have not been deemed worthy of being granted the “right of return”, something all Jews enjoy, mourn their disenfranchisement from land that had been in their families for generations and the systematic destruction of their people. Resettlement camps, refugee camps, security 'fences'; terms that sound like they refer to an age gone by, but no, they refer to the “modern” State of Israel; the modern Apartheid State, the Genocide State. In seeking a way to honour a land that I am entitled to become a citizen of by virtue of my birthright – something that my brother is denied by virtue of his – seemed like a necessary thing to do, and yet I struggled with the task; how can I, I asked myself, honour a nation that routinely murders innocent civilians through the use of military tactics and weapons that are designed to maximize collateral damage? Would that not be like endorsing their activities? Perhaps it boils down to what is actually said and the tenor of the message; it should not be doubted at this stage that these comments are being provided by someone even remotely sympathetic to the Zionist agenda. Having said that I will add that I am vehemently opposed to all violent approaches to settling the “Middles East situation”, save for the one where everyone who does not want to live together in peace is sent to a deserted island where they are allowed to starve to death ... unless they can cooperate and work out a way to get off the island. There is no excuse for violence; Period.

Thus, I have decided that the only appropriate homage to the State of of is through poetry. There are three poems below: the first is a simple Haiku, the second, entitled 'Being' is an exploration of an existential/metaphysical struggle, while the third, 'Hatikva', deals with the issues of promises. I hope you enjoy them. All poems are ©2008 by Peter Amsel, and the illustrations are © by Ben Heine. 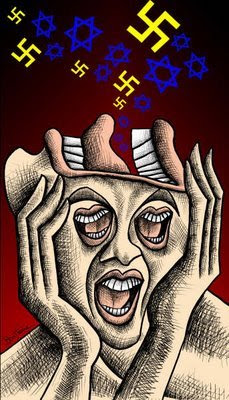 Being disappears, slowly at first
but inexorably with each passing moment
as our lives are crushed by the weight of others
bearing down upon us
like jackals to their prey,
seeking out the weakest
the youngest
the most vulnerable.

With teeth bared in a flash of anger it ends in an instant
the flash of blood and a muffled scream
the only reminders for the witnesses for what they have seen
once again
as death has its way
unfettered by any restraining forces
prowling with the voracious appetites of
unfulfilled lust ...
for blood and fear ...
for the sake of pure terror ...
for no reason at all.

Being dissolves – begins to fade
the memory a sun-washed derelict of days gone by
requiring much more repair than any will invest ....

Being rusts, it crumbles and rots ...
and disappears.

What there isn't always is the will to see
that other way;
the will to do something that is more difficult
just because it is the right thing to do.

There is always another way.
We won't see it with our eyes closed,
nor with hardened hearts and stiff necks,
our sympathies closed off to the pain of others,
to the suffering they feel, and
the tears they shed.

We won't hear the lies that are told, in our names,
when we cannot see that their stories
are our stories,
just as real;
their sufferings are ours,
their blood flows just as red.

So long ago in places with such terrible names;
names like Auschwitz and Sobibor,
Westerbork and ...
sobering names, to this day,
places where the ground will cry out
with the horrors of what took place
until the end of time,
just as it does for those who have been
dispossessed of their homes,
in modern pogroms and purges,
cleansing the land.

“My homeland, my homeland”, they cry,
calling upon the
Name of the Lord while driving others
from their homes.

Evicting them,
just as they had been driven out,
forced to live in Ghettos,
awaiting their resettlements,
awaiting their deaths;
knowing that the promises they were told
were worthless ...
worth less than the dignity they were being treated with ....

There was no astonishment;
they had been lied to, were being slaughtered,
and are now doing the same;
stealing with impunity,
leaving shattered lives amongst the broken promises ...
broken by both sides,
neither trusting the other, some would say
with cause, 'justifiably', with reason ...
There is no other way,
there is no other way, (They say)
the truth becomes just another casualty to a war that has
yet to begin tallying the total cost of its folly;
and why should they worry ...
another lie, after all, comes so easily now.

We have all mastered the art,
turning away when things are
too difficult to face,
too “hard” to watch,
or just something that we find distasteful.

After all, if you can survive without a home for sixty years,
why should we worry about another decade ... or two,
or four?

All we have to do (lies coming as easily as a waterfall) is
offer the palest promise of “peace”,
of reconciliation,
a promise of settling the issues,
once and for all ...
until it's time for the next bombs to fall. 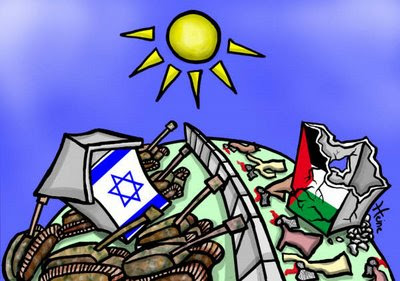 There is no alternative to peace; peace is not the result of war, nor is it the product of a “strong” security policy. Peace is a way of life that can only come through true dedication and desire; without that there is no hope.

The days of that cancerous, terrorist rathole in the middle east are numbered. Rest assured.