Intro: I came across a website this morning that inspired me to leave a comment on their site; having written the comment it occurred to me that this was worthy of being posted here as a post of its own, with a brief introduction. While I'd rather not promote the original website, it would hardly be fair to post my reaction to their material without presenting their point of view … so, if you want to see what ‘inspired’ me, click here – the link will open in a new window. In a nutshell (no pun intended – really) the site is called the ‘American Grand Jury’ and aims at the passing of legislation requiring future candidates seeking the office of president to be required to demonstrate their eligibility to seek said office through the presentation of a valid birth certificate proving that they meet the requirements of Section 1, Article II of the U.S. Constitution. 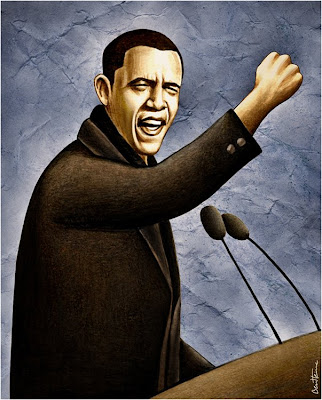 It is astounding to read the number of invocations calling for the ‘taking back of America’ and how the ‘impostor’ president must be removed. What I must question, however, is the number of others who disagreed with this view and, in November of 2008, decided that Barack Obama was their choice to be the 44th president of the United States.

There are several reasons for which there were hearings regarding the status of John McCain and not Obama - not the least of which being that the powers that be (REPUBLICANS at the time) decided that there was no compelling reason to question the status of Obama’s birth while McCain’s birth in the region of Panama was questionable as Panama was a protectorate, not a state.

This is a situation of pure and simple racism masquerading as political action: people who cannot accept that someone named Barack Hussein Obama can, in fact, be a Christian rather than a Muslim - despite the fact that he attended a school that was Islamic. There is also resistance to the idea that a black man can be qualified to sit in the White House. How dare they pretend to be qualified when there are so many deserving white folk ready to slip into that seat in the Oval Office. Bunk, pure and simple bunk.

The idea of passing legislation to enforce something that is already accounted for in the Constitution is, quite frankly, a waste of the time of the House and Senate - it is a waste of taxpayer’s money to even consider such nonsense. Obama’s BC is on record and was accepted by a right-wing publication before the election - of course, that obviously wasn’t enough for the most ardently right-wing racists who cannot accept that democracy sometimes means the votes of others mean that your opinion is not the prevailing opinion for the next four (or eight) years.

Perhaps you should be looking inward rather than outward to discover why your views have become so anachronistic and ‘out of date’ with the rest of America. How can change come when minds are closed? when spirits are locked in opposition to anything that looks different to what you are familiar with or used to seeing?

Remember, taking care of your fellow man and for the weaker amongst you does not have to be related to communism or socialism, nor does the ’sharing of wealth’ have to be similarly associated: it can be more appropriately related to something called Christianity where we minister to the weak and the sick and the community shares its resources, ensuring that no one goes without anything (Acts).

Obama is not some foreigner trying to make the United States a socialist nation - he is an American Christian who is walking the walk, trying to make the nation move back towards the true vision of Christianity that could be possible if only the people of the nation would wake up, shake of the greed, consumerism, and lust for personal ‘everything’ and be willing to re-evaluate their lives so that all Americans could share in the true American dream: a nation where everyone is guaranteed the opportunity to live without having to mortgage their lives in the event they require health care, an America that does not allow people to die if they have a ‘pre-existing condition’.

Unfortunately, the right-wing would rather eat their young and squabble about meaningless things like birth certificates rather than making the country a better place. No wonder politicians have to keep asking God to bless America - it certainly isn’t something He would do of His own accord.

The above paragraph is where my comment ended: I would add, however, that it seems incongruous to have so many people proclaiming that the United States is a nation founded upon Christian principles, yet it seems completely opposed to living up to the high calling of that label. People do not seem to have any idea as to what it means to be a true Christian, or what Jesus asked His followers to do after He left them, charging them to continue with His ministry. The first Christians did not consider profit to be more important than the life of one of their fellow brothers or sisters in the Lord; they made sacrifices for the ‘body of Christ’ – otherwise known as ‘the Church’. Remember, in the Book of Acts (the ‘Acts of the Apostles’) believers brought wealth to the ‘Church’ and shared their wealth. This was not socialism – it IS Christianity.

2:44 ‘And all that believed were together, and had all things common; (45) and sold their possessions and goods, and parted them to all, as every man had need. (46) And they, continuing daily with one accord in the temple, and breaking bread from house to house, ate their food with gladness and singleness of heart, (47) Praising God, and having favor with all the people. And the Lord added to the church daily such as should be saved. (Acts 2:44-47, emphasis added)

For the first time in recent history the people of the United States have elected a man to the office of president who actually seems to believe what the founding fathers promised with their fancy words so long ago. Of course, when the Constitution was written, this same man would have likely been consigned to the roll of a slave, not permitted to even learn to read; a true expression of the Christian ethic that the founding fathers embraced. It is time to allow the president to do his job; criticize him for not acting fast enough or for not fulfilling all of his campaign promises, but when it comes to hysterical claims that are as fallacious as the Nigerian e-mail scams, it’s time to put them to rest.