Hold onto the Dream

Yesterday was the 46th anniversary of the now infamous 'I have a dream' speech, delivered by the Reverend Martin Luther King, Jr. at the March on Washington. While I was not born until 1968, both of my parents - strangers to each other in 1963 - traveled to Washington to hear Dr King speak. [As an aside, my mother traveled on a bus with my grandmother and, when they arrived in Washington D.C., from New York, my grandmother broke her ankle when she stepped off of a curb and miscalculated its height ... but, she stayed for the event.]

This post came to being as a response to an article posted by DesertPeace, on his blog. He was at the rally as well and, yes, he is my father (though I have wondered on occasion if there could be a mistake, then I see my hairline and these thoughts are immediately dismissed ... not to mention the 'duck waddle' ... there is a predisposition in our family to 'walk like ducks' ... but I digress. Suffice it to say, I have not questioned issues of paternity for a long time).

As a result of his article I posted the following reply, but I decided to turn it into a post of its own, with some minor changes.

You may see a video of the speech here (it will open in a new window).

There are many people who are convinced that the dream espoused by Dr King is dead. As dead as King himself. There may be cause to believe this; at times the United States gives one the impression that it is going to implode upon itself, finally reaching a critical mass that cannot exist for one more minute and which must destroy itself lest it destroy everything in the surrounding area. The alternative is to allow this seemingly ever-increasing organism to continue to lash out at other nations as they try to get their way in political matters. This path has led the United States, over the past eight years, to travel down a path of war against a nation that had nothing to do with attacking them, torturing political prisoners for questionable information about potential attacks that could not be verified by other sources, and a litany of other offenses that make the term 'civil rights' appear to be an umbrella phrase for the types of things that the government is going to limit or take away, all in the name of 'security' and the 'protection of freedom'.

The protection of freedom, however, can only exist when all people share the freedom. There cannot be freedom for a portion of society when another portion languishes in any form of inequality. This is as true today as it was during the time of slavery, or back when the Catholics expelled the Jews from Portugal in 1492. Freedom cannot discriminate, it must be universal in order to exist. So long as there are people in the United States who are oppressed as a result of their economic standing or because they are perceived as being lesser than the rest of the group to which they are being compared, freedom will only be an ideal to which people aspire but which is not achieved. The simple reason that this is that the nation is unable to confer the same rights and freedoms to all when it knows that this involves something more basic than any legislation could deliver or any march could confer, it requires the education of the public.

Once the population of America learns that they are EACH afforded the same rights and opportunities, guaranteed by LAW (something that you can only learn if you stay in school, which the ultra right count on not happening to those who they want to keep down), what can stop people from actively pursuing a future that does not have anything to do with the perpetuation of the stereotypes that have kept them locked into poverty since the end of the Civil War? 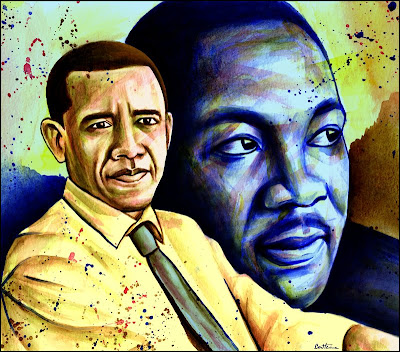 The Dream must not be allowed to die, it is far too important, far too vital, and far too essential to the future of America. The Dream must be revitalized, taken to its extreme, and it can be, if only people would stand up and demand from their elected officials the things that they asked for during the election campaign. A president will only do what they believe the people want, if the electorate seems to be turning away from the core message, what does that tell the administration? Many from the Civil Rights 'movement' voted for Barack Obama - seeing him as a direct result of the dream. Now is the time to continue with that vision; now that he is in office, continue to write to him and encourage him to maintain his focus, to not abandon his agenda and to fight for the rights of those that elected him. A silent majority is, quite frankly, useless.

Dreams can only die when the dreams are allowed to be forgotten. Just imagine what would have happened if everyone who was at that march went back home and became a genuine agent for change. Rather than just talking about 'having been there' and reminiscing about how wonderful it was they could have used the event as a rallying cry to galvanize their cause, to collectively join together - both black and white, Jew and Gentile, to create the America that was dying to be born.

After the death of Martin Luther King, Jr. the dream didn't die, the man did; the dream, however, became something of a hallowed fantasy that was more spoken of in whispers of awe rather than in the tones of something that could actually be accomplished. Even with the passage of the Civil Rights Act of 1964, after the assassination of JFK, a bill that was brought to fruition with the help of a junior senator from Massachusetts, Edward M. Kennedy, there was not as much support as there should have been for the simple reason that the 'movement' found it difficult to separate their hatred of Lyndon Johnston and his involvement in Vietnam.

Once Martin Luther King, Jr. was out of the way the civil rights movement was right where the south wanted it; instead of having a galvanizing force to keep the blacks, whites, Jews, and other colours of the rainbow working together for a single cause there was now a myriad of agendas competing to be heard. This allowed the southern states to react to the new laws without worrying about pesky 'leftists' from the north as they were seemingly less interested in risking their lives now that their guiding light had been removed from the picture.

Perhaps that sounded cynical; good, it was supposed to sound cynical. There is nothing worse than taking something like the messages delivered by Dr King and dismissing them, saying they have not been achieved, or will not be achieved, without asking the very serious question: why not. What is the cause of the failure? Where there not enough people invested in the cause that this should not have succeeded with flying colours? Of course, the answer is that it should have been an overwhelming success; there is no reason on earth for the cause of civil rights to have been stalled in the United States, unless there is an inherently racist nature in a certain part of the nation that is resistant to the entire prospect of civil rights and liberties. In fact, one might actually begin to believe that there is a portion of America that would be perfectly happy to re-institute the old lynching laws where it was legal to hang 'colored' folks from trees if'n there was a witness to the wrong doin', especially if one of them dared to look at a white girl askance, or was uppity enough not to step off of the sidewalk when white folk were approaching from the other direction.

God forbid these colored folk learned their letters. You know what they says about 'educated Negroes', don't you? Well, actually, I can't recall, but it can't be good, can it?

Certainly, there was great merit to the Civil Rights Movement morphing into the 'Peace' movement, and the 'Anti-War' movement - but, unfortunately, the organizers were very narrow minded in the focus and could not see the forest for the trees. They did not understand that there was a marked difference between the domestic policies of a government and their foreign policies. Was Johnson involved in an outrageous, unlawful war in Vietnam? Certainly - it was horrible and should not have been allowed to continue. However, what he was trying to do on the 'home front' was an entirely different matter and that, regardless of the war, deserved the support of those who had been fighting for the rights of others; those pieces of legislation proved to be fundamental for the future of the advancement of Civil Rights in America, regardless of whether or not 'the movement' was there to support those who created the legislative language. They simply missed the boat.

History is often a recounting of the stories telling us about lost opportunities or seemingly unique occurrences that led to a totally unlikely outcome. In the history of the Civil Rights Movement the name of Dr Martin Luther King, Jr. will never be easily forgotten, but the acts of his many followers - after his death - will go down as one of the greatest losses of potential political power the United States has ever known.

It reminds me, very much, of what happened when a 'community organizer' rallied the support of grass-roots individuals, using the Internet and anything else at his disposal to create an irresistible atmosphere that countered anything his opponents could muster. People have been intent on trashing his presidency without giving him a chance to do his job, but it is always easier to judge than to allow someone the opportunity to do what they have promised. After all, before he was elected, did the previous president include the spending on the war in the numbers on the debt? No. Why? Because it looked bad; on the other hand, this guy has - but it looks bad - yes, it does, but it is truth. Now he gets blamed for it; how sad. Short memories make things like George W. Bush possible.

It also makes the passing of Dr Martin Luther King, Jr. even sadder for we forget how often the dream is invoked, and then forgotten. Why forget? Pick it up and carry that dream; it encompasses all that America has not yet achieved, all that it can be, all that it should be, all the promise that has not yet been fulfilled by those words, 'We the people,' - a declaration that rings hollow if it does not represent all of America, not only a select part of the nation.

That is a tragedy from which there may be no recovery.