Much Ado about Helen

A tremendous amount has been made over the words uttered by Helen Thomas recently, words spoken on May 27th, interestingly enough four days before the attack by the Israeli Defence Forces against a flotilla of unarmed civilians bringing humanitarian aid to besieged refugees in Gaza. Nine innocent and unarmed civilians were slaughtered by the defenders of the Zionist state, but it’s not okay to criticize them, is that what we are hearing? I listened to what Helen Thomas said and listened carefully; she understands history and is more than capable of reporting her stories without bias.

When asked if she had anything to say about Israel she said, ‘tell them to get the hell out of Palestine.’ When asked if she had ‘anything better’ to say, Thomas continued, ‘remember, these people are occupied, and it’s their land; it’s not German [sic], it’s not Poland.’ Having heard this answer Rabbi Nesenoff, the man conducting and filming the interview, proceeded to ask a loaded question that indicated he fully understood that Thomas was discussing contemporary immigrants, not Jews who had been born Israel.

When asked, ‘where should they [the Jews] go’, Thomas replied, ‘go home, Poland, Germany, and America, and everywhere else.’

This answer lies at the crux of the controversy causing many to label Helen Thomas as an Anti-Semite who is insensitive to history; even her colleague and co-author, Craig Crawford, has announced that he will no longer be working on future book projects with Thomas as a result of this comment, but is that an over-reaction? Was Helen wrong? Was she taken out of context?

Under the ‘Right of Return’ law Jews are allowed to become citizens of Israel by virtue of being Jewish, even if they were born in America. Someone born in the ‘Holy Land’ who is not of Jewish descent, on the other hand, is not allowed to live in the home of their ancestors as it has been stolen and turned into a ‘settlement’, all so the ‘Jewish State’ can reclaim its Biblical borders.

Thomas’ reply was not insensitive to history, it was correct in every way to the political realities of the warped ‘Right of Return’ law and how it discriminates against non-Jews living in the Holy Land. When asked, ‘where should they go’, she replied, ‘go home, Poland, Germany, and America, and everywhere else.’ She did not say they should be killed or expelled, which is something that Israel routinely does to the Palestinians living within the borders of the state, but that can be dismissed as an ‘inconvenient truth’ that nobody wants to discuss. 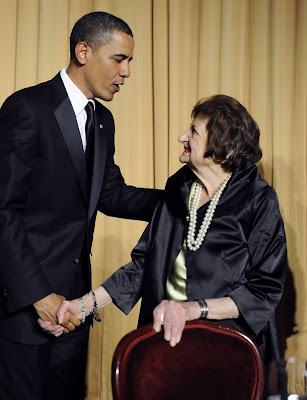 As a result of this honest answer the website that interviewed her, ‘Rabbilive’ asked the pointed question as to whether or not Helen Thomas could be trusted. They posted, at the end of her ‘interview’ that six million Jews ‘were killed at home … In Germany and Poland. Does Helen know that Jews have lived in Israel way before the Holocaust?’

Yes, I’m sure Helen knows this fact, however, does that mitigate the fact that Israel has been carrying on a war against their neighbours? That they have been using criminally devious tactics, including the use of White Phosphorus artillery shells, against civilians living in Gaza while stealing land in order to continue with the development of the settlements that have been condemned by many civilized nations on this planet?

The most outrageous part of this ridiculous episode has come from, of all places, the Administration of the United States President. Press Secretary Gibbs should have made no comment about Helen Thomas’ comment for the simple reason that she is NOT part of the Administration. Of course her comments are not a reflection of the official policy of the government; even after Israel murdered nine innocent civilians the government has sat on its hands as though it were afraid to say anything nasty, as though it might offend the mighty Jewish State and send them into a whirlwind of retaliation against the United States.

Excuse me, but when did the State of Israel become more powerful than the United States of America? I’m sorry, but I just don’t ascribe to that crap about the Jews controlling that much power: they control as much as you allow them to control. If you stop listening to the AIPAC lobby they have no power. AIPAC can only influence people when they are listened to; otherwise they are a Zionist tool that should be expelled for sedition. They serve the interests of a foreign state, not the United States.

President Obama may stand up and say that Israel should stop building settlements and that Jerusalem should be a city for all, but the truth of the matter is that the Zionist State of Israel is a nation guided by a policy of institutional racism. Anyone who has lived through the Civil Rights Movement in the United States or has studied the fall of Apartheid in South Africa, or has any inkling of the history behind the Holocaust should be able to see this as clearly as the rising of the sun in the morning and the rising of the moon at night.

What we must also understand is that it is NOT Anti-Semitism to criticize the policies of the State of Israel. To be against the ideals of Zionism is not to be against the Jew just as being a Democrat in the United States does not make you ‘unpatriotic’. The idea that this is so is one of the lies perpetuated by the Zionists to defend the indefensible; they know their policies lead to the deaths of innocent people so they hide behind the label of ‘Anti-Semitism’, knowing that anyone labeled with it will be stigmatized and will have to shrink away.

As for Helen Thomas, BRAVA! It’s about time people in the press started speaking out against the atrocities being committed by the State of Israel … and just in case you missed it, her comments were made on May 27th; Israel attacked a flotilla carrying aid to Gaza on May 31, killing 9 unarmed civilians.
Written by Unknown at 13:57