One of the blogs I follow with some regularity is maintained by my father; the blog, 'Desertpeace', presents a variety of articles about the situation regarding the plight of the Palestinian people at the hands of the Israelis. It is an anti-Zionist website that often presents political cartoons by associate bloggers, as well as other articles by journalists who regularly post to the site in an effort to share their views with as large an audience as possible. In a post that appeared on the 8th of August, a post that was a cartoon entitled the 'Boycott Toon of the Day' a comment was posted regarding the conviction of Sherry Jackson for failure to pay her taxes. While I read a few articles pertaining to the Jackson case, that is not what this post is about, nor am I claiming to be familiar with the particulars of the case. What compelled me to write this was a comment suggesting that no law exists in the United States compelling its citizens to pay taxes. 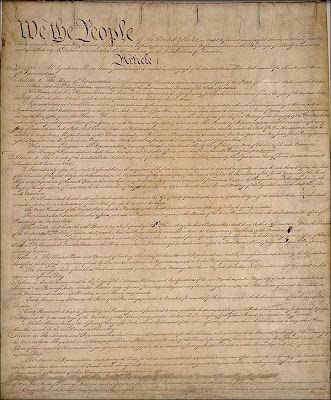 Many times people question the legality of taxation in the United States without realizing that there are, in fact, laws stipulating that it is legal – lawful – for the government to collect taxes from the citizens of the nation. First, ratified in 1913 is the 16th Amendment of the Constitution – an obscure, often unused document that is usually only used when Americans want to protect their ‘right’ to carry a firearm (without having to serve in a militia).

“The Congress shall have power to lay and collect taxes on incomes, from whatever source derived, without apportionment among the several States, and without regard to any census or enumeration.” If that isn’t explicit enough, there’s more … but it will only upset you (it isn’t from the 16th …).

Title 26 of the US Code is also known as the Internal Revenue Code and contains the statutory tax laws of the land, including the tax rates according to level of income (which demonstrates that Americans are being taxed at the lowest rate since long before Ronnie Ray-Guns).

So, yes Virginia, it is lawful for Americans to ‘pay their fair share’, it is part of the law of the land to dig into your pocket and help pay for the roads others use and pay for the health care that someone else consumes – why – because that’s what makes a country great – that’s what allows a country to continue.

The fact that the country’s taxes are also spent, unfortunately, on the machines of war is something that must be addressed by the influence of the public through the ballots they cast and the pressure they put on those who represent them in Washington. As soon as you say ‘nothing we do will make a difference’ you are right: nothing YOU do WILL make a difference with that attitude. Just remember, a ‘community organizer’ with ‘no experience’ managed to galvanize enough people when he shouldn’t have (according to the ‘experts’) and did what ‘shouldn’t’ have been possible.

As it was said at the beginning of the movie ‘Armageddon’: It happened before, it will happen again.

Americans have to come to the realization that they have been lied to by people too lazy to read the law: Taxation, with representation, is the law of the land. What must be addressed is the representation part – the taxes are necessary to make the nation function. Would you rather not have things like fire departments, schools, and other things funded with public monies? Who are you going to call if your house is burning or someone has had a heart attack and you need to access the 9-1-1 service? This is one of the great positions of Libertarians – it’s great to believe we can ‘do for ourselves’ and ‘stand on our own’, until you can’t – until you need the help of someone because you are in a position that requires assistance. That is the way of humanity. It is why we live in communities with other people – note the word ‘community’ – the root word being ‘commune’, people coming to live together for the ‘common good’ – sort of like ‘communism’ or ‘socialism’.

One of the functions of Government is to make the ‘community’ in which we live run smoothly, focusing on the needs of the people rather than the profits of a few select organizations. That is what we need to address. Stop the obscene spending on military expeditions that are unnecessary and inherently racist and focus on the needs of the people. But, if your income fits into one of the taxable brackets established in the tax code, pay your damn taxes – and raise the rates for the highest bracket to an appropriate level that is more in line with what is fair and proportional to what they are able to pay. That way there will be enough for everyone, especially if those with the most pay their fair share. If everyone would pay according to what they could afford it would be possible for everyone to have what they needed to live.
Written by Unknown at 14:34