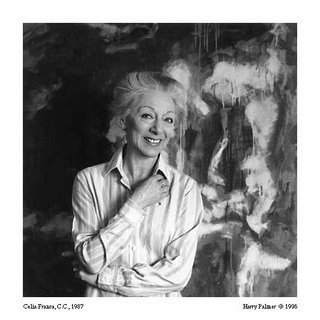 Six months ago I posted a brief article in honour of Canada’s Prima Ballerina emeritus, Celia Franca, who was being honoured by the National Arts Centre on the occasion of her 85th birthday. Alas, this morning came the sad news that Celia had died in the Ottawa Hospital after a long illness. She broke one of her vertebrae last year and had been in poor health for quite some time. The full article from CBC Arts can be found here.

I am including below my original tribute that I published on June 26th, just one day after Celia’s 85th birthday. As an aside, Celia had been married to Jay Morton, who predeceased her several years ago. I also had the honour of knowing Mr Morton, who had been the founding principal clarinettist with the National Arts Centre Orchestra. When I was a student at the University of Ottawa Mr Morton could regularly be seen when he came out of his fourth floor office and walked around the hallway. It was a great loss for the Music Department when Mr Morton died, but I always remember one thing: the way he and Celia were together.

Celia had come to the music building to meet her husband and when they left they were walking arm in arm, both wearing long coats; it was like a scene out of a classic movie, only there was nothing contrived or fake about the scene.

That is why if I had to summarize who Celia Franca was in only three words, I would say she was “a class act”.

Celia, you will be missed.

There are some people who cross your path and leave an impression unlike anything else. Celia Franca is that type of person. The founder of the National Ballet of Canada, Ms. Franca remains a fixture of the Canadian artistic community and a great supporter of the arts. She celebrated a milestone birthday on the 25th of October, and while it isn’t supposed to be polite to mention a ladies’ age, the press announced that Ms. Franca had turned 85 and would be honoured at the National Arts Centre this evening.

Any honours that they may decide to bestow upon her are inadequate. Celia Franca is a national treasure, and I am honoured to have met her on several occasions, and to have known her late husband, Professor James Morton (former first clarinet of the NAC Orchestra and professor at the University of Ottawa).
Written by Unknown at 08:15