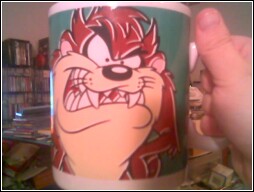 I'm trying an experiment with my blog ... so, if you are one of my regular readers (the hundreds of thousands of you waiting with baited breath to read my latest thoughts), I apologize if this isn't what you were expecting. Then again, I doubt that any of my posts would qualify as being anything that anyone "expected" of me ... but that's neither here nor there for now (though I do suspect that some of you are now wondering about whether or not I�m delusional ... well, don�t expect me to tell you!).

The point of this, for now, is to try and present something more - genuine. Something that provides a bit more insight into the phenomenon that I often refer to as my life (for lack of anything better to call it).

Today (the Friday portion) was quite interesting, and tiring. The hospital presented a guest lecturer from the UK who spoke about the use of Cognitive Behaviourial Therapy in the treatment of individuals with Schizophrenia and active psychosis. Dr Turkington (from the University of Newcastle-upon-Tyne, England) demonstrated that there was a far higher rate of recovery (and compliance to treatment programs in general) when the people experiencing severe symptoms were treated with a combination of medication and CBT as opposed to relying solely upon the medication.

The most significant thing that seemed to come out of the presentation was something that Dr Turkington said within the first few minutes of his talk. As he described his early training as a psychiatrist he said that (paraphrased), "we were told to ignore what the patients [with schizophrenia] were saying while experiencing their delusions. What I discovered over time, however, was that there seemed to be something about what they were saying and it usually related to what they were experiencing."

In essence, he discovered that it was important to listen to the patient and to not be immediately dismissive of what might be said merely because it is couched in the language of illness. When the core of the delusion or the paranoia is examined, when it is possible to seek the root of the issue, that is when it is possible to take some control over the thoughts and feelings that are causing difficulties.

It is a lesson that is not only relevant to people with serious mental illnesses.

The idea behind Cognitive Behaviourial Therapy is quite simple, which is why it is so helpful to so many people. The essence of CBT focuses on our ability to change the way we think about something. When we have a thought (say, for example, after seeing something) certain things happen. Our brain takes the image as we formulate the thought, then we have a "feeling" about what we have just seen, and our bodies can also have a physiological response (if we see something scary, for example, we may experience a sudden rush of adrenaline as our bodies prepare us to run away from a perceived danger). So, when I saw the woman at the coffee shop my thought was, "she's beautiful", and everything felt all "warm and fuzzy" (get your minds out of the gutter - it's a quick example).

Most important to the idea of Cognitive Behaviourial Therapy is the idea that we can change our thinking. I like to think of it in terms of "short circuiting" a process, or interrupting the thought process that leads us astray.

First we must be cognizant of our thoughts - but this is an easy enough habit to get into - paying particular attention to "hot thoughts", those thoughts and feelings that "trigger" things in us that aren't necessarily things we want to happen. When we notice this, we consciously change our response - we rewrite our internal dialogue to something more appropriate for the time. A good example of this would be my reaction to spiders. I have never liked spiders ... some who know me well would laugh at that, having heard me scream on more than one occasion when I have had the misfortune of encountering one of these eight-legged creatures as its life intersects with mine.

No more. Over the past several years I have managed to train myself to not have that reaction to spiders. It isn't the greatest accomplishment, but it is the result of CBT. Anytime I saw a spider I would say to myself that "it couldn't hurt me, it doesn't want to hurt me, I have nothing to fear, ... and etc." While I'm not about to get myself a pet Tarantula, I can say that it is quite nice not to be so fearful of a little bug - for no good reason.

As powerful as our brains are, we must remember that mental health is a precarious balance. Hearing voices, one of the hallmark symptoms of schizophrenia, is actually experienced by about 20 percent of the population. The difference here is that most people do not find the phenomenon to be a troublesome enough that it interferes with their ability to function. At the same time, scientists have demonstrated that it is possible to induce a psychotic break in an otherwise healthy individual - after only two hours. How? By using a sensory deprivation tank.

The sensory deprivation tank is quite interesting - for the first few minutes, apparently, it is quite relaxing. It seems that our brains are able to expand into the nothingness and find solace, for a time. After that time has ended, however, the bad things started. In the end, after only about two hours, it was discovered that sensory deprivation could precipitate what we would perceive as a mental illness.

Two hours: That is how close anyone is to insnity. The time it would take to listen to Beethoven's sixth and ninth symphonies, and then ... madness. Can you imagine that? Of course you can't, it isn't the type of thing we should imagine, and yet we ignore so many of the people who have to live with this every day of their lives, and they can't make it go away just by pretending they are healthy - it doesn't work that way. Similarly, they can't be expected to learn how to apply the techniques of Cognitive Behaviourial Therapy on themselves when they haven't received some guidance from someone who has professional training in this area.

The most impressive thing that Dr Turkington had to offer regarding the success of CBT in the UK had to do with the bottom line, and for this reason alone we should be seeing CBT used as primary treatment option in conjunction with medications. It was shown that when CBT was used, the length of stay in hospital was shorter and there was a greater amount of time between relapse (with shorter hospitalizations after).

With the state of our health care system being what it is today we can ill afford to ignore strategies that has the potential to save the system substantial amounts of money by preventing prolonged inpatient stays. CBT is a treatment that allows a patient to live with dignity as they struggle against their demons, knowing they are not alone and that their fight is one that they don't have to face in isolation.

Now all we need is a government - a Ministry of Health - that is able to see beyond the end of the day and recognize that health care must be an investment - an investment in the people that provide the care and in those who receive it - one that pays out dividends that cannot merely be tallied in a column in some accountants papers.

Just remember, you are only two hours away from madness.
Written by Unknown at 01:37