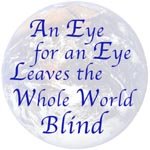 Since the world witnessed the massacre of innocent civilians in villages during the war in Vietnam, war has had a flavour that has inexorably changed the way the west wields its power. One would hope that this would mean that any war fought after Vietnam would have been careful to avoid the inclusion of the civilian population, particularly if a western nation was involved and they were interested in public opinion supporting their efforts. But that is not what happened. We just have more colourful language to describe what happens to the poor bastards who are unfortunate to find themselves (or their family/property/etc.) in the paths of the instruments of destruction used by the war mongers as they fulfil their megalomaniacal plans.

�Collateral Damage� is the euphemism favoured by the Hawks who are so pleased by the �pinpoint accuracy� offered by modern munitions, launched from weapons platforms that cost as much as the what some third world nations spend on health care � for the year.

Israel targeted two men with missiles. While this may have been a legitimate target (the fact that they attacked them during the day, in a residential area, shows an incredible lack of insight and contempt for human life � but that�s another point for another time), the attitude is appalling: Yes, the targets were successfully eradicated, but at what cost? With over thirty civilian wounded and eleven deaths, with the possibility of more to come, this is difficult to look at as anything less than a criminal act.

Given there are witnesses stating that a second missile was fired after the destruction of the target, when a crowd had begun forming around the wreckage � including people involved in attempting to offer rescue assistance, it seems difficult to believe that the second missile was fired to ensure that the vehicle carrying the targets was destroyed (there isn�t a single weapon carried by the F-15 [the mainstay of the IDF] that, when fired at a vehicle, wouldn�t destroy it completely if it hits it � including the Raytheon AGM-65 Maverick infrared-guided missiles or the M-61A1 20mm Gatling gun installed in the right wing root, which can fire between 4,000 and 6,000 shots per minute).

A second missile could only have been fired for one reason: to inflict damage (unless the pilot was under the influence of some mind-altering substance, in which case it is unlikely that they would have been able to fly the jet). If that is the case, there is only one thing that should happen: the pilot that fired the second missile as well as the commanding officer that ordered the firing should be brought before a War Crimes Tribunal in The Hague.

This isn�t a matter of being �anti-Israeli� or �anti-Semitic� � it is about being fair. One of the news reports you linked to described people having bullet fired back at them after throwing rocks. That isn�t a reasonable response to violence; it is an escalation, especially when you know the people with the guns have �less-lethal� ammunition available to them (though that doesn�t question the wisdom of throwing rocks at armed individuals, but that is another issue).

If Israel is going to continue to insist that it cannot live as a multicultural land they will have to become honest about their intent to ethnically cleanse the land of the Palestinians, for that, it seems, is what they are doing. We are not talking about subtle acts here, but rather the broad handed strokes of a sword-wielding hand as it beheads an innocent victim.

How many more heads must roll before the world has enough, before the sand runs red with the blood of the innocents?

Enough is enough.
Written by Unknown at 15:44

I just suggested to you on my thread that you convert your comment there to a blog of your own... I see now that you already did it.
Excellent points.