Marketing Soccer to the World 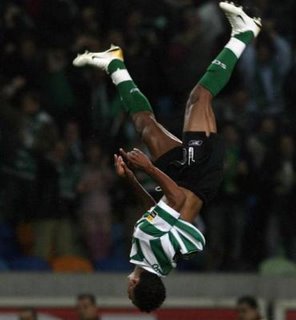 There is a problem with soccer, one that must be addressed before it can be fully embraced by the part of the world it is desperate to break into: the game must be made more accessible to the action-addicted west. It isn't that soccer is not already a tremendously popular sport, it is. The estimates for the number of people that will watch the televised matches, around the world, exceeds 20 billion people, about five times the population of the world. No, soccer is not in trouble, and it certainly doesn't need to become more popular in North America, but it wants that popularity. The simple fact is that while the United States (and Canada) may only represent about 350 million people combined, the amount of wealth controlled by North America is substantial. By not being a success in North America, soccer is missing out on an opportunity to significantly increase the size of their coffers.

Don't get me wrong, I'm watching the Fifa World Cup and am enjoying every (most every) minute of this, the beautiful game. At the same time I can't help but wish that Canada, a country of thirty million people could have managed to field a team for these finals. After all, Trinidad & Tobago, with about one million people, managed to qualify. Why is that? Do we not have the athletic talent in this country?

Considering how well Canada has performed internationally in other sporting events it is easy to believe that there is an abundance of talent in this country. Take the recent Olympic Winter Games in Torino: At one-tenth the population of the United States, for example, Canada won 24 medals, while the United States won 25. Considering our size, that is an amazing finish, but it also demonstrates that there is more than enough athletic talent in this country to field a team of any sport. All that is required is the training, and the desire.

What is needed, however, is a game that the west will find more palatable. At the moment, from what I can see, the main thing that is standing in the way of soccer becoming the true "football" here is the attention span of the average American (& Canadian). With a soccer match having two, 45 minute halves, it would seem like the perfect game, but therein lies the problem. Each half is played without stoppage, save for the few pauses here and there where the referee gives out a card, or if a player needs to be treated for injury. Either way, if the game starts at 4:00pm, it's a pretty good bet that by 4:50pm the half is over.

Can you imagine the main commercial networks sitting there, not running a single commercial for fifty minutes? No commercials, no revenue. No revenue, no profit. No profit? Fat chance. But the solution is quite easy to see, and it would introduce an interesting element into the game as well: I would suggest that the game change so there are three "intervals" rather than two "halves"... (or periods, or even four fifteen-minute quarters). A thirty-minute interval followed by an intermission, with two "thirds" to go. Very much like the national sport of hockey.

The real issue remains that of revenue. Advertising is the lifeblood of television in the west, and with anywhere up to 22 minutes of commercials broadcast every hour, even this new version of soccer would fail to satisfy the major networks (which is why in hockey the play is interrupted in order for television to insert their beer-plugs, while the players skate around and the fans scream themselves silly trying to figure out why nobody is playing).

The solution for soccer is easy: embedded advertisements, which may sound something like this:

"Welcome to this National Soccer League game between the Labatts Suds and the Michelob Mists. It should be an exciting game today, here in Microsoft Washington Stadium.

"The action has begun. The Suds quickly take control of the Nikon Prismatic Ball, driving it towards the Boeing Michelob net, but they're turned back by a solid Trojan defense. Mists' player, Johnson "Pepsi" Williams heads the Polaroid Colourfast Ball towards the Suds' end.

"Oh, goalie Marko "Marlboro Man" McGee waits in front of the Lougheed Labatts net. The Yahoo Ball is passed over to Roja, who passes to Simpson and it's intercepted by "Pepsi" who heads the Hotmail ball into the Boeing Michelob net ... it's a Coca-Cola Goal!"

On second thought, maybe it's a good thing that soccer hasn't broken into the west the way it has elsewhere. It is called the beautiful game for a reason: no need to change something perfect. Or is there? 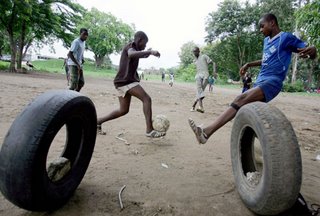 These kids from the Ivory Coast emulate their heros, playing in Germany '06.