Protect us from the Stupid People

If there is to be peace in Israel and Lebanon many place their hope on the actions of Condelezza Rice, Mahmoud Abbas, and George W. Bush. 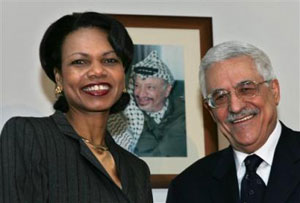 Don’t get your hopes up.

In statements that demonstrate just how far away from reality these folks are, President Bush told the press that the problem with this situation was that “terrorists hate democracies”. He went on to say that, “Israel, in my judgement, is the act of a terrorist organization trying to stop, ah, the advance of democracy in the region.”

“Democracy in the region”: what could Bush have been referring to, I wonder. Could that be Lebanon, the independent nation that Israel has invaded in the pursuit of Hezbollah extremists? Not according to this article. Bush seems to think that Lebanon has more in common with Iraq than meets the eye.

The actions of Israel are the acts of a terrorist organization, just as the United States continues to promote itself as the master terrorists in Iraq.

Secretary of State Condelezza Rice decided to revert to her role as Professor of Political Science while meeting with Mahmoud Abbas. She stated that the violence has been continuing because “there has not been a sustainable peace.” Wow … and to think, she even has a PhD and was a professor at Stanford.

In response to her brilliant observation, Mahmoud Abbas (who couldn’t be outdone by this woman) replied, “violence is the absence of peace”.

Now I have no DOUBTS that a cease-fire will be negotiated within the next … decade.

May God help us – quickly!

In case you missed it... go see
http://desertpeace.blogspot.com/2006/07/stupid-is-as-stupid-does-and-man-is.html

US military is being used as a terrorist organization. Sad. Nice postq