Given the current events going on in Israel these past few ... centuries (well, really, I suppose the correct thing to say is millennia, but I do really mean the most recent expression of insanity that has captured the headlines [BBC, Ma'an, Electronic Intifada, Guardian] ) I thought it might be appropriate to play around with the words “Shalom” and “Salaam”.

I have always been amazed that two groups, the Jews and the Muslims, could be so at odds with each other, and yet their greetings were so similar. “Shalom Aleichem” and “Salaam Aleikoom” (please pardon the ad hoc phonetics) are so similar it makes you think that the two peoples speaking the languages came from the same background.

Oh, that’s right, I almost forgot … Jews and Arabs, both called Semites, are referred to as the “children of Isaac and Ishmael”. The patriarch of the Jews and Arabs was none other than Abraham; we are brothers, we are flesh and blood, and we have more to gain by coming together than by continuing to invest in a war that kills many and scars all.

I hope you like this Shalom/Salaam picture I made - with the borrowed flag graphic. 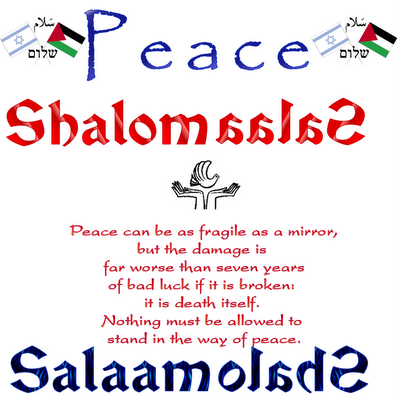 This is absolutely wonderful Peter, both the sentiments and the graphic. Great work!