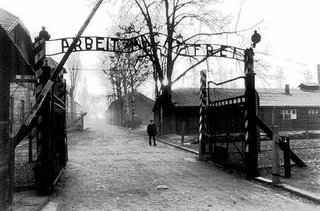 My mother sent me an e-mail this morning that cried out to be turned into a post here. The reason is quite simple: we are on the brink of a war that has no need to be fought, by people who have every reason in the world to live every say of their lives in the pursuit of peace. This is her message:

I received this "chain" today:

The thing to remember is that the six million Jews who were murdered would, today be the parents and grandparents of 20 million.

IN MEMORIAM - The event that cannot ever be erased! It is now more than 60 years after the Second World War in Europe ended. This e-mail is being sent as a memorial chain. It was launched during Passover 2005 "The Jewish Holiday of Freedom" until Holocaust Memorial Day, in memory of the six million Jews who were massacred during the Holocaust.

Please send this e-mail to 10 people you know and ask them to continue the memorial chain.

Please don't just delete it. It will only take you a minute to pass this along - Thanks!

[following comment added by my mother]
It is interesting that this comes to me today as the Middle East implodes: bombs are falling and whole communities are burning down; people are dying. Perhaps if the children and grandchildren of those that did survive had been able to learn the lessons of war....

As my mother so pointedly notes, the lessons of war – the lessons of the Holocaust – surely are enough to teach the generations of survivors that war is not the way to resolve the problems that we are facing.

The true message is that we must stop thinking and acting like savages when faced with something we disagree with. Believing that killing the dissenting idea is the best solution is a philosophy that can only lead to the death of the society: it only accomplishes stunted development of the society that ultimately finds itself unable to move beyond the problems that have come to define its very existence.

After all, as powerful as the City State of Sparta was, based on their warrior lifestyle, how much of their society do we ever hear about … aside from their army? In they end, Sparta fell, as do most military powers, as will Israel unless it decides that the path of peace is preferable to oblivion.

Peace: there is no other way.