When I was a child there was a bumper sticker hanging on a corkboard in our kitchen. The bumper sticker implored all who saw it to “Question Authority”. It wasn’t a fancy piece of art, with its simple black letters on a yellow background, but I would look at that every day and think to myself (as a child), “why would my parents want me to question authority?” Of course, at the tender age of eight or so my universe was quite centrally revolving around me, so this bumper sticker just had to relate to me.

One day I asked my mother why we should question authority. Her reply was that “you still have to listen to your teachers,” my mother has a way of seeing through any attempts at subterfuge, “but when we see something that is going on and we know that it is wrong, we have an obligation to speak up. Questioning authority means that you do not blindly follow people just because they are in charge.”

This did not immediately arouse a sense for being an activist, but it did keep me asking questions, particularly about “authority figures”. We live in a society based on the premise that the people who have been emplaced in positions of authority over us will perform their roles in a fashion that is honourable to the nature of their office. At least, that’s what we are taught in “Social Studies” (when we weren’t giggling about sex-ed issues that had been raised in “Health Class” during the previous period). What we learned boiled down to one main thing: we were taught about our way of living (here in the west), and why we (the democracies under the protective wing of the United States) are so blessed to be what we are.

Of course, the last time I stepped into a class outside of the university realm was over twenty years ago, which was when I started college. I cannot speak for what children are taught today, but given the general sense of inertial that afflicts our educational system, I imagine that the lessons haven’t changed all that much.

The truth of the matter is, alas, far less respectable. It is difficult to feel a sense of honour about politicians and officials that completely ignore the vox populi, the people who they (theoretically) represent. Instead of having politicians that serve the people we have a political system that allows the sale of power and influence to the highest bidder. The result is a government that is far more concerned about serving the special interest groups that installed them in office than actually dealing with the issues of the land that need handling.

It isn’t as though George W. Bush was the first individual who had the presidency of the United States presented to him by his father and a well-oiled machine of special interest groups guaranteed to drive the White House agenda far from the policies instituted by his predecessor. The great irony of Bush’s presidency is that with the vetoing of the proposed legislation on stem cell research, this president has swung further to the right than many of his strongest supporters.

When the authority of the land could not achieve anything greater than low average marks in university he doesn’t create the figure that young children can look up to with pride and say, “I want to grow up to be just like our president.” Children should have greater aspirations than that, especially in this time when there seems to be so much opportunity for youth. The key to those opportunities, so we have been told, is education. Whether it is “book learning”, the gaining of degrees and diplomas, or “street knowledge”, where you gain experience from … well, from experience, education is an ongoing process that successful individuals recognize never ends.

Authority loses its weight when, even before the end of his second term, this president is being cited by historians as amongst the worst, if not the worst, in American history. Children should have greater figures to look up to than that. Respecting the Office of President is something that is ingrained in the minds of children in the United States, and I’m not saying that there is anything wrong with that – we should respect our political leaders … but they, in turn, need to be people of character who deserve that respect. How much respect is due a man who makes light of the war he began over the weapons of mass destruction he knew didn’t exist (the U.S. hadn’t delivered them yet).

Children should aspire to greatness: they should be able to look at the figures of authority in their life and feel a sense of respect because it is deserved, not because we are told to “respect our elders”. There is a massive difference between showing someone respect because they are “an elder” and blindly prostrating yourself before a demagogue feeding on the fears generated by the daily doses of propaganda insisting that another attack against the United States in imminent … just as imminent as it was on the first major holiday after 9/11, and the next, and every other day that gave the Office of Homeland Fear-mongering the opportunity to raise the “threat level”.

Mr. Bush has created a war to fulfil the objectives that couldn’t be carried out by his greatest benefactor, a man whose own presidency could be considered as stunningly successful compared to that of his offspring. Now while Lebanon is being devastated by the IDF, this president chooses to sit amongst his advisors and do nothing. With a Secretary of State that seems to endorse the actions against Lebanon the President takes on part of the responsibility – and shame – for this action. 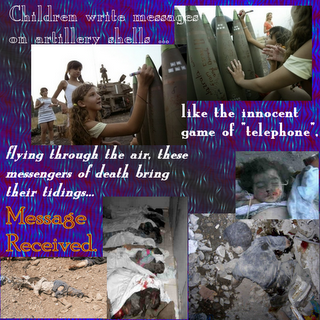 Look at the dead, Mr. Bush.
Learn their faces. Remember.